PARK CITY, Utah. – Home security systems have made mountain lion sightings a common occurrence in recent years. Mountain lions, which can weigh up to 200 lbs, often both excite and frighten the humans who spot them.

Darren Debloois, game mammals program coordinator for the state Division of Wildlife Resources, has advice on coexisting with big cats.

“People don’t need to necessarily change their behavior,” Debloois said. “other than to be aware of [mountain lions]. It’s very rare that lions come into conflict with people.”

Mountain lions (also known in Utah as cougars) are most active hunting at dusk and dawn. “Once human activity picks up…they retreat back to the wild, so it’s rare for people to see them.”

Debloois recommends being aware of surroundings, but there’s no need for fear. Don’t have pets or small children out unattended at dusk or dawn. Be careful with hobby-pets, like llamas or donkeys, that live outdoors at those hours as well; those pets should have shelters they can access for safety. If possible, don’t leave pet food outside.

For those recreating during mountain lions’ busy hours, Debloois recommends ditching the headphones. “You’re probably more likely to run into a person of ill intent [than a lion], but it’s good advice just anytime you’re somewhere by yourself to be aware of what’s going on,” he said.

On the unlikely chance of a mountain lion run-in, “make yourself look big,” he said. “If you’ve got small pets with you, pick them up. The same goes for kids; you can even put them on your shoulders. Try to make yourself look big, yell and shout. If worse comes to worst and that lion attacks, fight back with everything you got. Don’t play dead.”

He reiterated the rarity of attacks, but noted the animals are closer than one may think. “If [people] do a lot of backcountry recreation or hiking on trails on the mountains around town, they’ve probably been close to mountain lions lots of times and just never even realized,” he said.

Such close proximity to nature is something many locals and tourists treasure about Utah. But with it comes the responsibility to understand safe, responsible coexistence in the Park City playground.

“There probably are more lions in the state now than there have been maybe in the last ten years or so following the mule deer population,” said Debloois. “So, if you’ve got deer in your neighborhood, chances are there’s a mountain lion somewhere in the area.”

Mountain lions, like bobcats, are obligate carnivores, meaning their diet is comprised only of meat. “They don’t eat much of anything else,” he said. “Their primary food source in Utah is mule deer. 60 to 70% of their diet is mule deer-based.”

Average-sized, mature female mountain lions weigh around 80-90 pounds. Average-sized males weigh 160 pounds. They are solitary creatures and can take down a mule deer, elk, or even moose independently; they also prey on raccoons and other smaller mammals.

Due to mountain lions’ aversive nature, the DWR only has a population estimate of about 2,500 state-wide. That number does not include cats under one year old.

The DWR is learning more about mountain lions, and trained staff has very carefully collared about 15 in the state.

“Right now, we have a project where [specialists] go into the lion’s den where they have young. The lion will retreat, and you rarely see her, but she’ll hang out, and you can get in there and put collars on [the kittens]. They don’t have to tranquilize if they’re young enough, so we try to get in with them in about five days at birth. We go in groups of five or so, and we’re prepared, but the risk is low. Lions don’t usually try to pick a fight with people.” 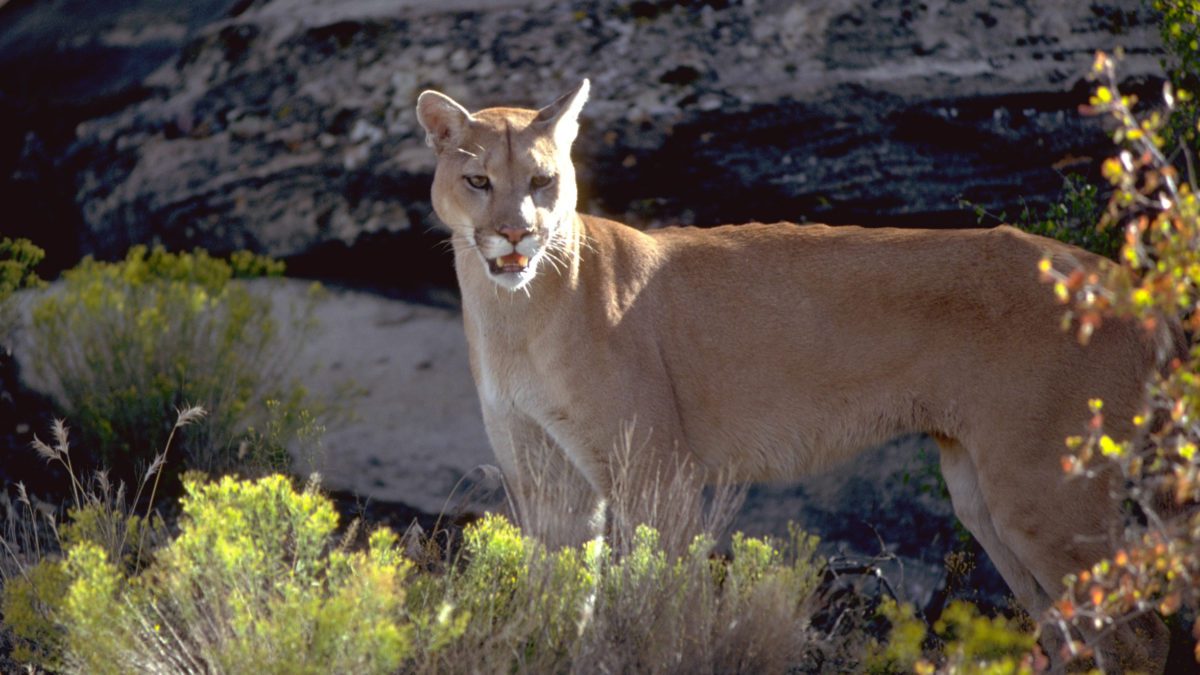